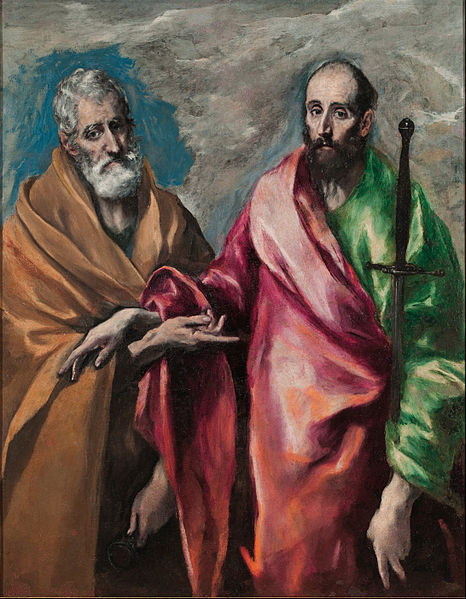 On the 29th June we as community celebrate the feast of Saints Peter and Paul, two disciples who travelled the company of Jesus to become the catalysts of Christianity in the West. But who were these two men?

"Simon was introduced to Jesus by his brother, Andrew, who was also a fisherman. Later Jesus changed Simon’s name to “PETER”, from the Greek word, ‘Petros’, meaning “Rock”. Peter and his faith would be a rock on which Jesus would build his church, even though Peter would run away and deny knowing Jesus in his hour of need.

Peter served as the leader of the first group of Christians. He travelled to the centre of the Roman Empire, and there became the first bishop of the city of Rome. The bishop of Rome is now called the “pope”, a word which means “father”, recognising his leadership.

PAUL used to be called “Saul” and had been a Jewish official who hunted down Christians. He was one of those responsible for their deaths, but then had a vision that changed his life, and he became a Christian. Being given a new name, “Paul”, was a sign of being called to live a new kind of life." (extracts taken from http://www.prayingeachday.org/June29.pdf)

Both Peter and Paul have become key figures in our community, in Rome especially they have become pillars for faithful. What makes these two such great examples to us however is not necessarily found in their actions and good deeds that shone as a bright light to all others, but rather in their darker moments. The extract above reveals to us their sinful sides, Simon Peter of cause is remembered for his denial of Christ and Saul persecuted Christians, but they came to realise their misgivings and went on to become the figures we know them as today. And it is here that we take our lesson from them. We all sin. As Catholics we accept that we have done wrong but that through the wonder of the sacrificial Lamb that is Jesus we are freed from those sins and can thus go forth and live our lives in God's name. And that is exactly what these two represent that no matter how bad we have been or how far we have fallen from grace there is always redemption to be found in God's mercy, and that forgiveness is attained in how we live and present our self's.

( The link above is a wonderful resource for daily prayers and meditations, providing us with food for thought as we go about our daily lives.)

“For those who love God everything works out for good, because God has chosen us to bear the image of Jesus, his Son. With God on our side, who can be against us? Even if we face hard times or are threatened - God’s love is greater still, and nothing can ever separate us from his love. Through all difficulties we can never be failures or losers because of the power of God’s love. Amen” (based on Romans 828-39)