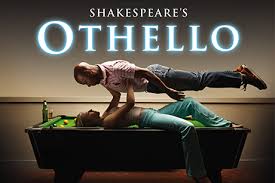 Unlike the original play this exciting modernised take on the classic ‘Othello’ is set in a rough pub around a pool table. The play is enticing from the start, with a propulsive soundtrack to add to the fierce intriguing drama that represents the original play in an interesting way, with hard- hitting choreography throughout. The play takes the audience on a captivating journey through Othello and Desdemona’s love affair exposing prejudice, danger and fear along the way. Iago’s lies and manipulations leave Othello open to jealousy and attack, leading to violence and tragedy for everyone. Overall this modern take on Shakespeare’s ‘Othello’ is a must see and is a powerful production of this classic dark tragedy.