The Cardinal Wiseman ‘Youth Speaks’ team are currently celebrating their third successive year as West London Champions in the competition. 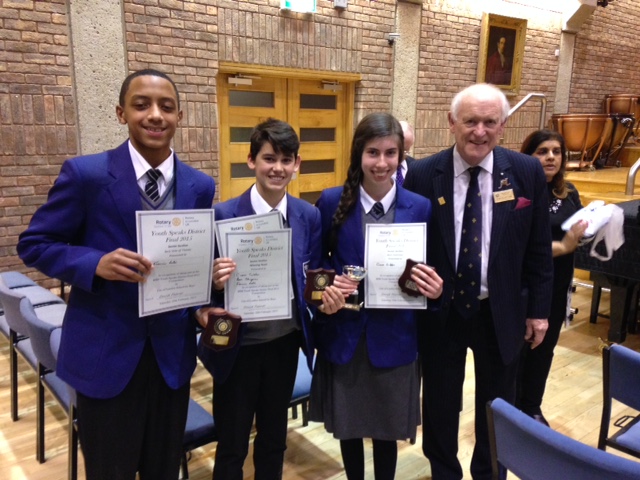 The Cardinal Wiseman ‘Youth Speaks’ team are currently celebrating their third successive year as West London Champions in the competition. The Year 10 team, consisting of Ciara Gibbs, Benjamin Shipman and Francis Lali, won the West London Final on Wednesday 25th February at senior level, having competed and won the intermediate section for the previous two years. This year they wrote a very poignant and entertaining speech on ‘The Value of Time’ and performed it in front of the judges and other schools from the West London area at St. Benedict’s School, Ealing. The team’s delivery, timing and use of humour was superb, especially considering they were competing against many older students from St. Benedicts, Latymer Upper School and St. Augustine’s Priory. The team won Best Senior Team overall (winning individual prizes for Best Speaker and Best Vote of Thanks) and went through to the London District Final on Saturday 28th February at the City of London School, St. Pauls.

Despite stiff competition from other winning London teams, Cardinal Wiseman’s entry was flawless at the West London Final on Saturday. Ciara Gibbs put in an outstanding performance as the team’s Chairperson, confidently and entertainingly introducing the topic to the audience. Benjamin Shipman stood out with his articulate, humorous and persuasive main speech about the value of time and how we should cherish it. Francis Lali was superb in his role as Vote of Thanks. The team were up against The American School of London, amongst others, but ended up winning all three individual prizes (for Best Chairperson, Best Speaker and Best Vote of Thanks) and, unsurprisingly, won Best Senior Team. They now go through to the South of England Regional Finals on 21st March 2015, representing London.

The team received much praise from the judges at both the West Area and District Finals, who commented on their outstanding public speaking skills, use of humour and co-operation together as a team. We are extremely proud of Ciara, Ben and Francis and wish them lots of luck in the next round on 21st March, at the City of London School. Having been narrowly defeated at Regional Final in 2014, the team are practising hard in the hope that they will get through to the National Youth Speaks Final in May 2015, which would be an outstanding achievement.