Our Year 13 Media students travelled to Harrow for a visit to the University of Westminster, Media, Art and Design Faculty.

Our Year 13 Media students, together with Mrs Hamilton, Mr Bruce and Mrs Sowa travelled to Harrow for a visit to the University of Westminster, Media, Art and Design Faculty. This is what two of the students participating had to say afterwards:

On the 29th September, Year 13 Media students visited the University of Westminster, the Harrow campus. This particular campus is where the Media, Arts and Design subjects are held. When we arrived we were greeted by a friendly group of students who gave a presentation on the subject that they take at the University and then they took us on a tour of the campus. Each of the students was really passionate about their subjects and at the end of the tour we had a chance to ask them any questions we had about the campus or subjects. I was most interested in the Contemporary Media Practice BA Honours and Film BA Honours course. I was not disappointed! The film course had a top range of equipment that each student had access to for both in course and extra-curricular projects, plus, two studios and green screen room for filming. The campus even had their own radio station with sound booths that are modelled on professional radio stations like BBC Radio 1. Outside the classroom, the main hall had a creative space that had a really arty vibe to it. It had large pods for working and eating and stairs with large colourful beanbags. I was extremely impressed with the courses and the campus. I will undoubtedly be going for a second look at the University of Westminster. 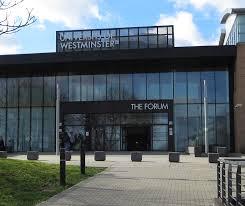 Our trip to the University of Westminster’s Harrow Campus began with entering through The Street entrance, going through The Forum building and being shown a presentation on the types of media courses the university has to offer, mainly focusing on the ‘journalism and mass media’ course. I do believe that this presentation was well put together and presented effectively by the students. I really enjoyed seeing pieces of work, especially commercial products which stunned me because of how professional it looked. The Forum Building was very spacious and quiet giving me the feeling that if I ever had to work there, I would be able to do so in peace. There were also sitting areas with circular domes going over the top of them which looked aesthetically pleasing and comfortable to sit in.

After the presentation, we were taken to various parts of the site, including the rooms the radio recordings are made in, the place where all of the film students sets are made and also a ‘white room’ where all of the photography students’ pictures are produced. The radio rooms were laid out in a very professional manner, easily emulating almost all of the major professional radio stations layouts. The equipment in each of them also looked top notch and easy to use. The staff member, John, who was in charge of building all film sets had a friendly aura and seemed like he would be easy and fun to work with. The pictures that were being produced in the ‘white room’ by the photography students looked sophisticated shown in how the levels of the colours (e.g. magenta) were being labelled to show the difference in how they would come out.

One major thing I like about the University of Westminster is that the courses are ‘multimedia’ meaning that they do not really bind and keep you to a specific platform of media, so if you wanted to change from radio to film in your first year, you could do so seemingly easily.

Finally, one thing, however, I would have liked to get out of the visit is a showing of the accommodation. But I believe I’ll go back on one of the later public open days to do so.

We would like to thank Jamie O’Hara, a member of the Schools and Colleges Outreach Team at the University of Westminster, for organising the visit for us and finding a group of very enthusiastic and friendly student ambassadors who all made our students feel very welcome.